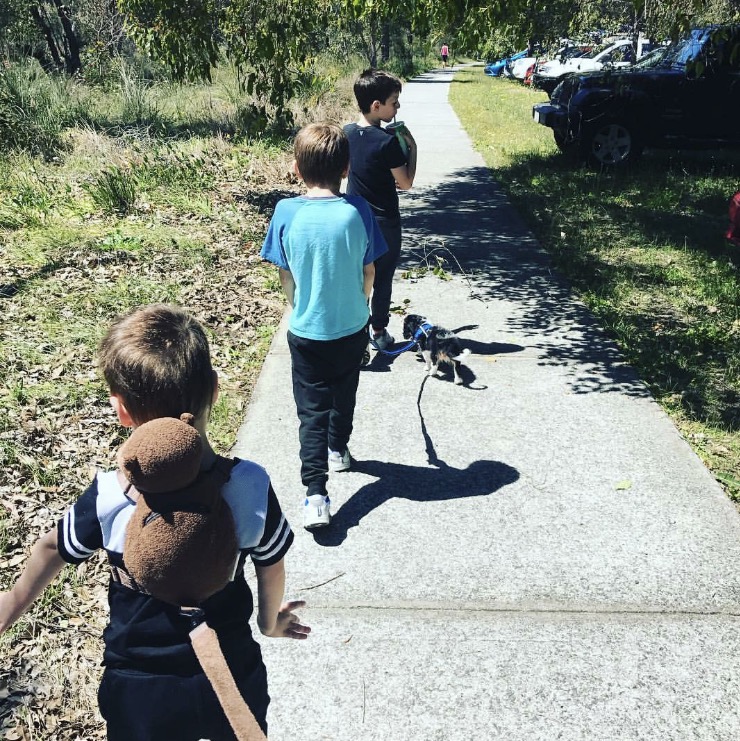 In the term 3 school holidays last year we had a very bad day out. I can look back on this day now and laugh but at the time it was a shocker.

The Pokèmon game was popular at this time and Kallan had been begging to go to kings park and hunt for some. I really liked the Pokémon game as it encouraged the boys to get out of the house and be active. It was a beautiful sunny day and I thought ok I can do this on my own, easy.

We had recently had a new puppy join our family. Rocky. It was decided Rocky would come too and this would be a great day out for all. I stupidly decided that Patrick would enjoy running around and burn off some energy and left the pram at home, opting for a harness to keep him from running away.

So off we went for the hours drive to Kings park. If you’ve never been there before it’s huge. There are so many different playgrounds, walking trails and things to do. Campbell was wanting to go by the war memorial to the city viewing platforms. He loves to watch all the trains, buses and cars go by and look at the sky scrapers.

Being the school holidays and a sunny day, the car park was full. We had to park quite a bit away from where the boys wanted to go. So we set off for the walk. I noted there was a playground and a drinking fountain on the way past to remember how to get back.

Kallan had been wanting set off a lure at one of the Pokémon stops so we picked a shady spot to sit and let him do that, I think the lure lasted 20 minutes. Patrick was getting restless, Campbell was moaning that this was taking too long and Rocky had begun to attract a lot of attention. Everyone wanted to pat him. After what seemed like the longest 20 minutes ever Kallan was happy with his Pokémon catch and we could move on.

Off we headed to go past the war memorial to see the city. Only Patrick weighing 18kgs didn’t want to walk. He didn’t like all the crowds and his little legs were tired. So I had to carry him. We got down there and it was very crowded. Suddenly my dog became the Paris Hilton of Kings Park. You may think I’m exaggerating this but it’s true. People were crowding around us. I was having trouble keeping track of where the older two were due to the constant stream of people wanting to see the dog. Patrick was a crying mess, yet people still approached us. Some people even asked if they could get photos with our dog. It was mental.

Trying to carry a screaming 18kg 5 year old and pull a tiny puppy along on a lead I managed to get to the other two boys and say we had to go home. Now Campbell cracked it. He wanted to stay and look at all the cars. So I am now dragging two crying kids out of Kings Park and people are still asking to pat the dog!

I told Kallan to pick the dog up and hide it under his top if he had to, we needed to go! We walked along the road where I thought I had left my car. By now the sun was fully out and it had actually gotten quite hot. We were all sweaty, especially me carrying a hysterical child all this way.

Im pretty sure we walked for 2km in the wrong direction. I started panicking where was the park and the water fountain? I had to put Patrick down, who was clinging to me, scratching me, screaming to be picked back up, and check my phone. Yep, we had walked 2km in the total wrong direction.

By now my anxiety was in full force and I started thinking we were lost. We wouldn’t be able to find the car and how am I going to get all these kids back even if we do. I had to tell the kids to turn back. Now they were all crying. I promised them we would find the car this time, hoping that was true and when we did I would buy them a milk shake. We headed back toward the memorial when we came to a road junction and I saw a sign naming the park we had walked past on our way in. Relief flooded through me but we still had a long way to walk to find our car!

After another 2km we found our car. We got in cranked the A/C and headed straight to get a milk shake. By now my arms were dead and I felt like crying myself.

That was the last time we went to Kings Park with out Jeff with us or with out the pram! I ask the boys about that day and they all say it was the worst day ever.

I think all up that day I walked 6km holding a screaming, thrashing 5 year old. A good work out if you want to look for the positives,