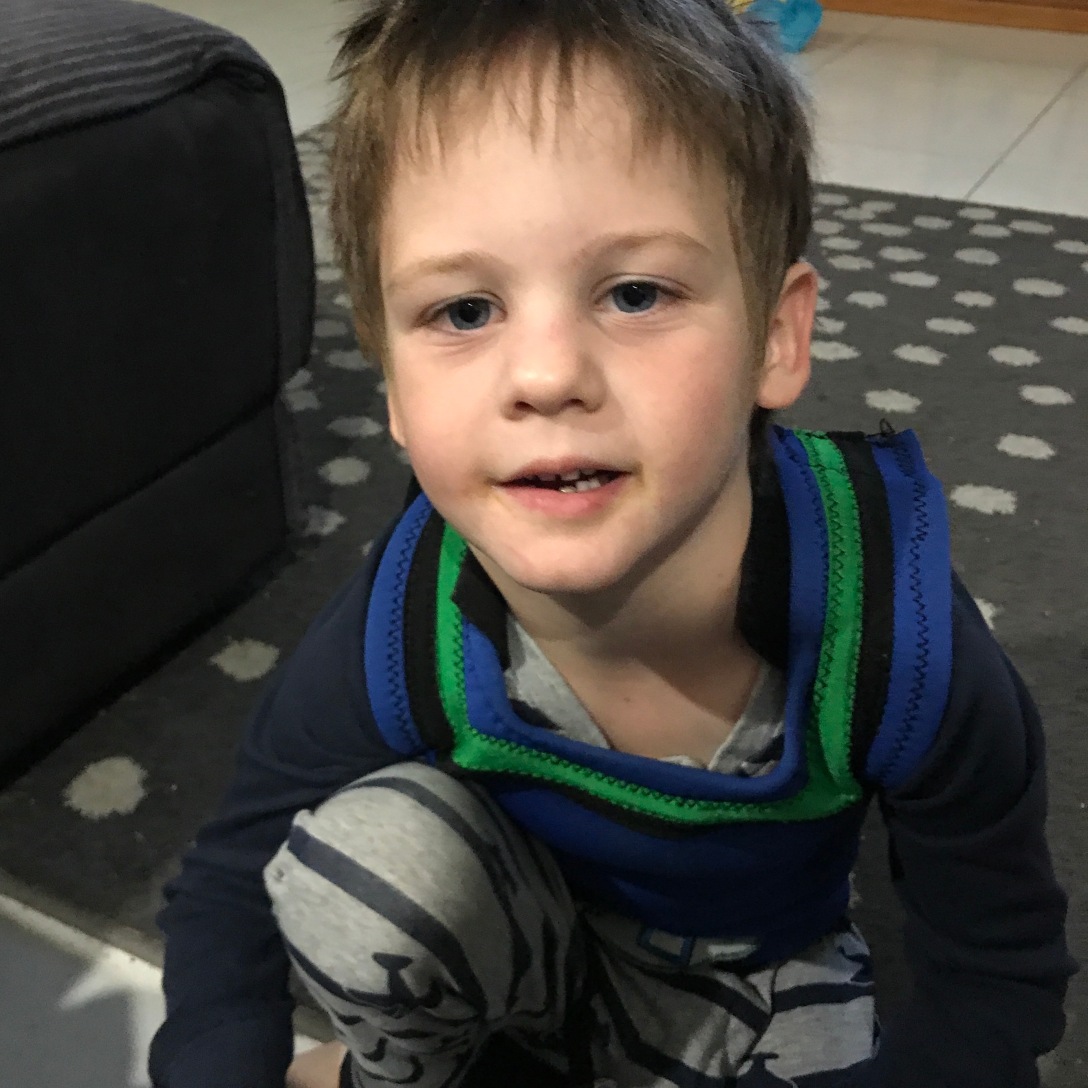 At six years old he is completely non-verbal. He has never said a word. He makes a lot of sounds and is very noisy but his sounds are mostly him stimming. He has just started using noise to communicate, in the form of squealing at his brothers to gain their attention. This is a big step forward but makes for a noisy household.

If I had to describe living with Patrick in one word it would be ‘messy’. I am forever cleaning my house and it still always looks like a bomb went off. I hate the mess. When there is stuff everywhere my anxiety takes over and I feel as though I can not breathe. I’ve had many panic attacks over mess in our house.

Patrick loves to play in the dirt and doesn’t mind bringing half of the sandpit inside with him. He also loves to get into the pantry or fridge. We have locks on both but sometimes you forget and are quickly reminded when you come in from hanging your clothes out and there is a carton of eggs smashed on the kitchen floor.

Patrick loves being outside and he loves to explore. We can not even have our windows open as he will push the fly screens right out to escape. Our doors are always deadlocked. We live right across the road from Patrick’s favourite thing in the world, water. I know that if he ever got out of our house he would head straight for the water and he has no fear.

Patrick has started showing interest in other children over the past few months but his interactions are not appropriate. He loves cause and effect. So doing something to see what reaction he will get. When he wants to interact with other children he will smack them, pull their hair or pinch them. Of course the child will scream or yell and Patrick sees a reaction. He doesn’t understand it’s a bad one. I believe he thinks he’s playing with them.

This really breaks my heart. I feel embarrassed he has hurt another child and yet I feel sad that my poor boy, even though being a bully, just wants a friend or someone to play with. He shows no interesting in joining in proper or appropriate games. So often I hear kids, including my own two boys saying “go away Patrick”.

Trying to engage with Patrick which has always been a challenge. Recently I’ve tried a new approach, joining in on his activities. It feels silly sitting in the dirt digging holes or spinning around or jumping on the bed, but Patrick loves it. Once he realises I am copying him he looks delighted and will try to see what crazy things he can make me do.

Obviously Patrick can’t talk and he can’t communicate everything in life via hand on hand leading, which leads to him becoming easily frustrated. When Patrick is frustrated he self harms. He bites his hands, both his hands are red and calloused. He bangs his head against furniture, walls, floors, doors and windows. I honestly have no idea how we’ve not had a broken window yet.

He also can be aggressive towards us. He will smack, kick, hit and pinch. This worries me as he is only getting bigger and stronger. We are hoping that once we find a communication that works for him that his frustration, aggression and self harm will lessen.

Patrick is very much a sensory seeker. He mouths everything like a baby would. He loves being squished tight, rough play, messy play, loud and exciting noises. He needs a lot of sensory input to keep him happy. It’s extremely challenging to keep him occupied. He has never shown an interest in any TV shows, movies or books. He has some toys he plays with but they are baby toys that are simple to use. You press a button and get lights and music.

It would seem he is endlessly hungry. He literally eats all day. He costs me a fortune in food bills. I have no idea how he hasn’t gained huge amounts of weight as unfortunately most of the foods he likes are junk. If you know me you’ve probably heard me say “you’ve got to pick your battles”. This is so true. As long as Patrick eats, I’m happy. He is good at trying new foods but if he doesn’t like them he will quickly spit them out.

Going out with Patrick can be challenging. At the moment we use a pram still. He absolutely hates being in a crowd or going to new places he hasn’t been before, so it’s better for him and for us to use the pram. It’s his safe place to sit in if he feels uncomfortable and it makes it easier for us as he is a runner. He’s very quick and again has no awareness of danger. So while he still fits we use the pram. We are trying to use it less and less but at the same time we do need to get out of the house some days and like I said “pick your battles”.

Making lots of loud noises and mess obviously makes it interesting when we go out. Patrick can certainly attract unwanted attention easily. I get a lot of anxiety about what people think. I know I shouldn’t care, but I do feel like people might be judging us. Family outings are usually only done when Jeff is home and it’s pretty rare I accept invitations to visit friends.

I feel bad for this as I love my friends but Patricks behaviour makes me so anxious I can never relax and enjoy people’s company. He’s always into someone’s pantry, or digging up their garden, or pulling their children’s hair. I know people are understanding but I just personally can’t deal with it. I always feel on the verge of panic attack.

All this said, I love my cheeky messy boy to the ends of the Earth and I wouldn’t change him at all. I’d only give him a voice,